Muşat & Asociaţii lectured at the Conference PHARMA 2007 on “The constant evolution of the Romanian pharmaceutical market”, organized by Finmedia on October 8-9, 2007 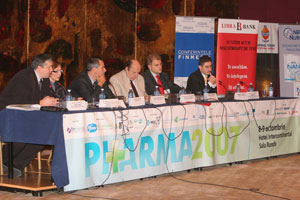 lecture „Legal aspects concerning the regulation of the pharmacy in Romania”, the main legal aspects in respect of the current regulation of the community pharmacy, according to the Order of the Ministry of Public Health no. 626/2001, as well as matters concerning a future pharmacy law. The lecture was held on October 8, 2007 in front of over 300 representatives of the Romanian pharmaceutical market, within the  PHARMA 2007 Conference held at the Intercontinental Hotel on October 8-9, 2007.

Throughout the debate emphasis was laid on the current regulation framework concerning the set-up, authorisation, organization, and functioning of the community pharmacy, as well as on major legal aspects which need further clarification or a new approach from the competent authorities in order to comply with the local and European laws (e.g., the entities that are allowed to set-up and operate pharmacies, the maximum term within which the Ministry of Public Health should solve the applications for pharmacies’ set-up, the unitary regulation of certain terms within which the competent authorities have to act/reply in connection with the applicant’s requests, aspects concerning the demographic criterion, sanctions for breaching of the legal provisions regulating the community pharmacy institution, the withdrawal and the cancellation of the functioning authorization, etc.).

Attention was brought as well to the importance of observing the provisions of art.43, art. 53 and art. 81-86 of the Treaty establishing the European Community by avoiding the introduction of new restrictions related to set-up, organisation and functioning of community pharmacies. To this extent, Dominic Morega issued several recommendations concerning a future regulation of pharmacies in Romania in accordance with the European laws and internal market guidance principles and also presented the latest infringement procedures initiated by the European Commission against the states that failed to observe the European Union principles in respect of their local regulation of community pharmacies.

Together with the representatives of the Romanian Government and Romanian Parliament, the representative of “Muşat & Asociaţii” sustained with legal arguments the necessity that the pharmacy institution be further regulated by a law issued by the Parliament and not through a government order, as currently regulated.