IFLR: Muşat & Asociaţii “The Law Firm of the Year in Romania” 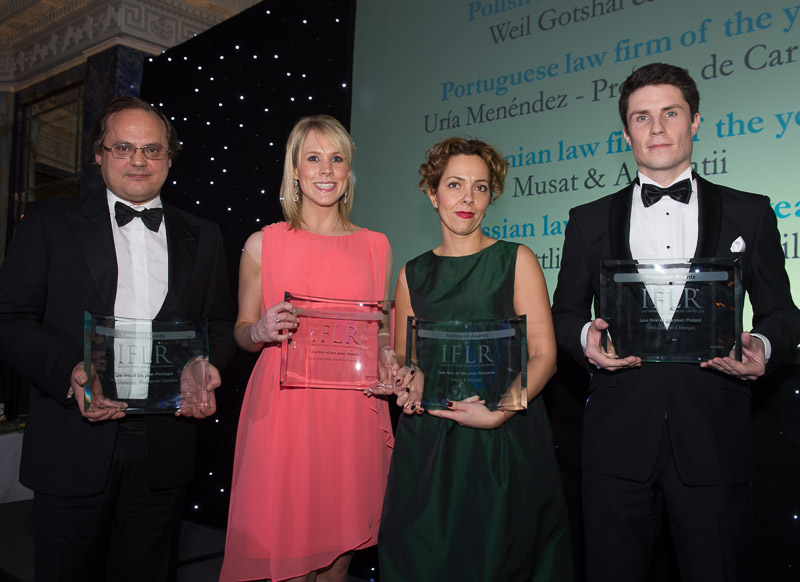 Muşat & Asociaţii won the „The Law Firm of the Year in Romania” award during the IFLR European Awards ceremony, held in London, on April 10 th , in the presence of more than 200 representatives of the most well-known European law firms. This is the second time in the past three years that Muşat & Asociaţii is granted this prestigious award, after the distinction received in 2011, when Romania was included for the first time on the list of countries nominated for the International Financial Law Review (IFLR) awards.

“We are honored to be recognized again as “The Law Firm of the Year in Romania” by a high-profile publication, such as International Financial Law Review (IFLR). Although our work continued in a difficult business environment, in 2012 we were involved in some of the most important transactions performed in Romania in the Mergers & Acquisitions, Financing & Capital Markets areas of practice, which reflected in an increase by more than 20% of our portfolio of clients and turnover. These high performances reconfirm the status of Muşat & Asociaţii as “ leading firm ” in Romania and the ability of our team to efficiently meet the current business requirements of our clients”, said Mona Muşat, Managing Partner Muşat & Asociaţii, at the awarding Gala.

The “IFLR – Law Firm of the Year” awards are granted to the most prominent law firms in 25 jurisdictions, for their successes in Mergers & Acquisitions, Financial-Banking & Capital Markets.

Muşat & Asociaţii also leads in the IFLR 1000 ranking in all the areas of practice reviewed in Romania, many of our partners, among which Gheorghe Muşat, Mona Muşat, Cătălin Băiculescu and Miruna Suciu, being recommended as “ Leading Lawyers ” in their areas of expertise, for the outstanding quality of the legal services provided and the high appraisals from the clients.

Among the reference transactions and projects conducted in 2012, we count the representation of Nokia during the divestiture of its operations in Romania and the sale of its production factory at Jucu to De’Longhi; legal assistance provided for Astra Rail Industries , in acquiring Astra Vagoane, Meva SA and Romvag Caracal (deemed as one of the most important transactions of the year), advising Sterling Resources throughout the negotiation of the agreements for transferring its interests in various oil plots in the Black Sea, but also Eldorado Gold Corporation , in the cross-border transaction (transaction value: USD 2.5 billion), whereby the latter took over the business of European Goldfields Limited in the field of gold deposit operation in Romania. In addition, last year, Muşat & Asociaţii further provided legal assistance toOZ Mineral Limited , a top Australian mining company, in relation to the EUR 200,000,000 bid for the purchase of Cuprumin S.A., and MID Europa Partners , a leading private equity investor, in respect of the acquisition of 50% of the shares in Walmark, the largest independent producer of vitamins and food supplements in Central and Eastern Europe.

Muşat & Asociaţii is currently providing legal assistance to the Ministry of Transportation in connection with the sale of the Romanian Railway Freight Transport Company – CFR Marfă and, furthermore, it is involved in most projects developed by State authorities through the Bucharest Stock Exchange, such as the sale of 10% of the share capital of Nuclearelectrica or the SPO of Transgaz for the sale of a 15% stock of the company’s shares. Muşat & Asociaţii was also involved in secondary public offering for the sale of 15% in Transelectrica , successfully completed at the end of March, with a transaction value of EUR 37.7 million.